According to the Amputee Coalition, approximately 185,000 people in the United States lose a limb each year to vascular disease or trauma. Fortunately, through the use of advanced techniques and treatment, patients now have more options.

The mission of the Penn Orthoplastic Limb Salvage Center is avoiding amputations, and restoring or optimizing function in the affected limb so that patients can return to normal activity. This is achieved through the use of advanced microvascular surgical techniques and complex fracture care.

A substantial proportion of patients enter the Center with injuries so severe that amputation would be the only alternative elsewhere. The Center is home to an impressive, multidisciplinary group of medical professionals whose defining achievement is their capacity to spare limbs seemingly damaged beyond rescue.

This combination of specialties was at the birth of a wholly new field of treatment: Orthoplastics.

The Penn Orthoplastics team is led by a physician known both for surgical acumen and leadership in the field, L. Scott Levin, MD, FACS, Chair, Department of Orthopaedic Surgery, Professor of Plastic Surgery in Surgery, Paul B. Magnuson Professor of Bone and Joint Surgery.

Dr. Levin studied at Duke University Medical Center, where he convinced the Chair – renowned orthopaedic surgeon James Urbaniak, MD —  that he had to learn free tissue transfer and microsurgery, the domain of plastic surgeons, to be a top-notch orthopaedic surgeon. By 1991 he had earned dual board certification in both orthopaedic and plastic surgery, and in 1993, coined the name for a new field: Orthoplastics.

PJ, a healthy 37-year-old man, spent a night in -30° temperatures when he became lost while snowmobiling in Colorado.

When first responders found him in the morning, his feet were badly frostbitten. Immediate therapy for frostbite involves hydrotherapy for rewarming, topical antibiotics and dressings, and these procedures were performed in a local ED. Because an interval of time must then pass for clear demarcation between viable and nonviable tissue to become apparent, PJ remained in a Colorado hospital for two weeks, at which time he was diagnosed with stage 4 frostbite, and told he would need bilateral amputation of his toes and forefeet.

Seeking a second opinion, PJ then consulted a local orthopaedic specialist, who, aware of Dr. Levin’s reputation for reconstructive microsurgery, referred him to the Penn Orthoplastic Limb Salvage Center (POLSC) at Penn Medicine.

When PJ presented to Dr. Levin, his toes and forefeet demonstrated clear signs of necrosis, toenail loss and full thickness skin sloughing over the dorsal aspect of both feet. Nerve conduction and EMG findings from the medial and lateral plantar nerves were normal, demonstrating the absence of neuropathy. An arteriogram was performed, which demonstrated adequate circulation to the proximal foot and ankle.

In the same operation, microanastomosis (microsurgical attachment) of flap vessels to recipient vessels was performed using the operating microscope. The microvascular reconstruction procedure took more than five hours per foot to complete, and was a complete success, as the team was able to save both feet. 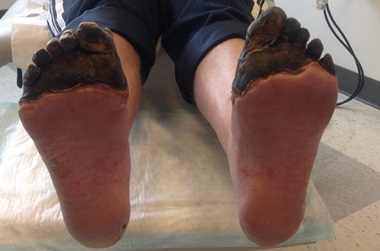 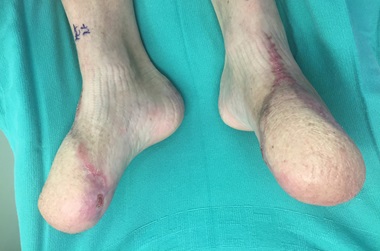 PJ remained in a hospital bed for five days following surgery for flap monitoring. On day six, he was mobilized out of bed in a wheelchair; on day 15 he began partial weight-bearing ambulation using crutches. PJ slowly improved his ability to ambulate and at one year was walking without support and wearing footwear comfortably.

In instances of peripheral trauma or vascular injury, rapid decision-making is key. Generally, the best prognosis for limb salvage with soft tissue coverage occurs within five to seven days post-injury, when the likelihood of flap survival and fracture healing is optimal, and the risk of infection can best be addressed.

To consult with a Penn physician or refer a patient to Penn's Center, call 215-615-6978. You will be connected with a Penn Orthoplastic Limb Salvage Center surgeon to discuss your patient’s case.