Across a span of hundreds of miles from central Pennsylvania to central New Jersey, patients are increasingly gaining convenient access to cutting-edge cancer treatments and experts. Here’s how they’re getting there.

Calling it a hub-and-spoke model doesn’t quite fully capture how the Abramson Cancer Center delivers advanced cancer care to patients at Penn Medicine locations far from the center’s downtown Philadelphia home. It’s more dynamic than that, like a lit-up, interconnected set of highways ferrying innovation and expertise back and forth.

“This is how Penn Medicine is influencing care in the community,” said James Metz, MD, chair of Radiation Oncology at the Perelman School of Medicine. “Part of the whole idea of bringing together Princeton Health, Chester County Hospital (CCH), Lancaster General Health (LGH), and all of the other places was to be able to deliver high-end care across the community and impact those communities. But not just through an acquisition of those facilities. It’s about a true partnership with them to make it happen.”

So far, those highways have been busy. Tele-health, the electronic health record system, and virtual tumor boards are just a few of the new and immersive ways that clinical teams and patients at the sites, including the new Penn Medicine Radnor facility and CCH, are now more connected than ever with experts at the Perelman Center for Advanced Medicine (PCAM). The efforts became accelerated and even improved by the COVID-19 pandemic, as remote care became essential and patients preferred to be as close to home as possible.

“We have been able to prove in a rapid way that we can do it and do it effectively,” Metz said.

Many of the cutting-edge cancer technologies and care patients receive in downtown Philadelphia continue to make their way to community sites, and, in reverse, patients travel to the city when appropriate to receive specialized care. Penn residents and fellows who practice at many of the network sites live locally as well, making them not just providers but part of the community fabric.

In February, Mary Barbee enrolled in a metastatic breast cancer clinical trial for women with certain genetic mutations led at Penn by Payal D. Shah, MD’09, a breast medical oncologist and assistant professor of Hematology/Oncology at the Perelman School of Medicine, when she heard about it from her N.J.-based oncologist, Priya P. Gor, MD, MSCE’07, the medical co-director of the Penn Medicine Virtua Cancer Genetics Program. Barbee was excited for the opportunity to be enrolled in the trial that put her on the targeted therapy olaparib after learning her tumors had grown, even if it meant crossing the Delaware River to get to the trial site at PCAM.

“When Dr. Gor told me about the clinical trial, I said, ‘Yes, anything to help me extend my life,’” said Barbee, who was diagnosed with metastatic breast cancer in 2019 and lives in Voorhees, N.J., with her husband. “It sounded like a promising trial, it’s specific to my inherited gene, and the fact that they had some success with the first part of the trial, I’m cautiously optimistic that it’s going to help.”

“This has taken a huge travel burden off our patients and will likely increase participation in these trials,” said Shanthi Sivendran, MD, chief of Hematology/Oncology at LGH.

Ongoing efforts are also bringing more advanced care and trials directly to patients in the community — no bridge crossings or highways required.

“The community sites are hungry for more clinical trials at their locations,” said Lynn M. Schuchter, MD, chief of Hematology/Oncology. “And we’re committed to expanding them.”

For example, a $2.5 million philanthropic gift from Robert Orsher, V’79, and Andrea Orsher, V’79, made to support Angela M. DeMichele, MD, MSCE, the Alan and Jill Miller Professor in Breast Cancer Excellence, will help fund a network for metastatic breast cancer clinical trials: a mobile research unit allowing nurses and coordinators to travel to sites to perform follow-ups on patients and other related tasks.

First up is a pilot at Penn Medicine Valley Forge (PMVF) and LGH, and there are plans for future sites. Another trial that has already opened at PMVF, thanks in part to $1 million gift from Sallie Korman and her late husband Berton supporting community research, will advance Schuchter’s work in melanoma, with two more trials expected to open at LGH’s Ann B. Barshinger Cancer Institute in Lancaster.

By the spring of 2022, cancer patients in the Lancaster area will also have access to proton therapy at the Ann B. Barshinger Cancer Institute, giving Penn Medicine and Pennsylvania its second proton site after the Roberts Proton Therapy Center opened its doors 12 years earlier. The single-room center will be the only location in Central Pennsylvania to offer the advanced mode of radiation treatment. 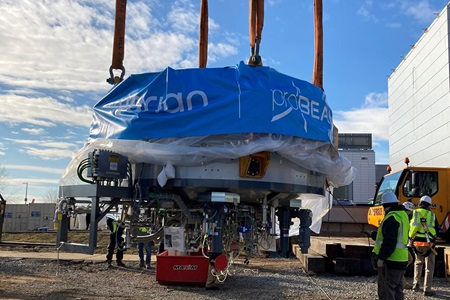 The $48 million project hit a milestone in January when a tractor trailer delivered the cyclotron, a centerpiece of the technology weighing as much as a 747 airliner. After an expedition across the Atlantic Ocean and a 75-mile ride from Baltimore Harbor up to Lancaster, the mammoth piece of equipment was hoisted and lowered into its new home.

“I think adding proton to the cancer institute at Lancaster General is going to be an inflection point in cancer care, not only in Lancaster but across Penn Medicine,” said Kevin Mahoney, CEO of the University of Pennsylvania Health System, at the virtual groundbreaking of the proton center. “This has been a moment we have been waiting for, and it’s where we take the absolute best of the science we create downtown and bring right to the patient’s front door.”

While Lancaster patients receiving proton therapy won’t be in Philadelphia 90 miles away, some of their clinical team will. After initial scans to access their tumors, gigabytes of data will be electronically whisked back to the physicists and dosimetrists at PCAM, who will expertly map out customized treatment courses.

“The patient may never see that all that work has been undergone centrally to assure they get the highest quality of care locally,” Metz said. “That’s a unique process.”

As part of the Penn Medicine and Virtua Health strategic alliance, plans for a third proton center are also underway in Voorhees, making it the first proton center in Southern New Jersey. The center will join a slew of established cancer care services already offered at Virtua, including medical and surgical oncology, microvascular reconstructive surgery, cancer genetics, and high-risk screenings.

“We have a road map that will help us continue to drive the right technology and care to the right patients in the right location,” Metz said. “This is only the beginning.”