June 13, 2018
Figure 1: One year lateral view of a prosthetic total talar replacement in a 27-year-old patient who experienced avascular necrosis following a nonunited fracture of the talus

Orthopaedic trauma surgeons at Penn Medicine are combining three-dimensional printing and radiologic studies to create personalized, implantable metal devices for patients with talar osteonecrosis and other challenging and complex reconstructions.

The talus is considered the universal joint of the foot. Articulating with the calcaneus (heel) below, the tibia and fibula above and the bones of the forefoot, the talus is designed to channel and distribute body weight. The bone has three distinct regions, a forward head and posterior body separated by a thin, concave neck comprised of cortical bone. Injuries to the talus are uncommon, but when they do occur, 50% occur at the neck.

The blood supply to the talus is extremely sensitive to injury as it is largely retrograde and vulnerable to disruption in talar neck and body fractures.1 At the talus, any interruption of this tenuous vascular network by obstruction, compression or disruption vastly increases the likelihood of avascular necrosis (AVN). Among fractures involving comminution, separation at the talar neck, joint subluxation, displacement of the talus from its conjoining bones, or open injuries, the incidence of AVN rises to between 50% – 100%. Talar AVN often results in post-traumatic arthritis and arthrosis of the subtalar and ankle joints.

Treatment of talar AVN is determined by severity. Limited osteonecrosis at the talus can be treated by extended restriction on weight bearing with the addition of a cast or brace. Traditional treatment of severe, advanced AVN of the talus, however, requires secondary or salvage procedures, including talectomy, bone grafting, fusion, or in cases with extensive necrosis beyond the talus, below-knee amputation.

Recently, surgeons at the Penn Trauma and Fracture Program introduced prosthetic total talar replacement as an option for patients with advanced osteonecrosis of the talus. The advantages of prosthetic replacement to more traditional alternatives for the treatment of talar AVN include improvement in pain, preservation of leg length and joint function and a faster recovery time with limited weight-bearing restrictions.

Developed more than a decade ago, prosthetic talar replacement has been limited somewhat by the need to produce an accurate, individualized reproduction of the talar shape and size. To overcome these concerns, Penn orthopaedic trauma surgeon Samir Mehta, MD, and colleagues have called upon a company that produces orthopaedic implants with 3D printing technology. To produce a talar implant identical to that of the removed bone, a three dimensional radiological image of the opposite talus is created, then reversed for the 3D printer. This perfect replica is then recreated as a full-metal prosthesis and implanted to replace the necrotic talus. 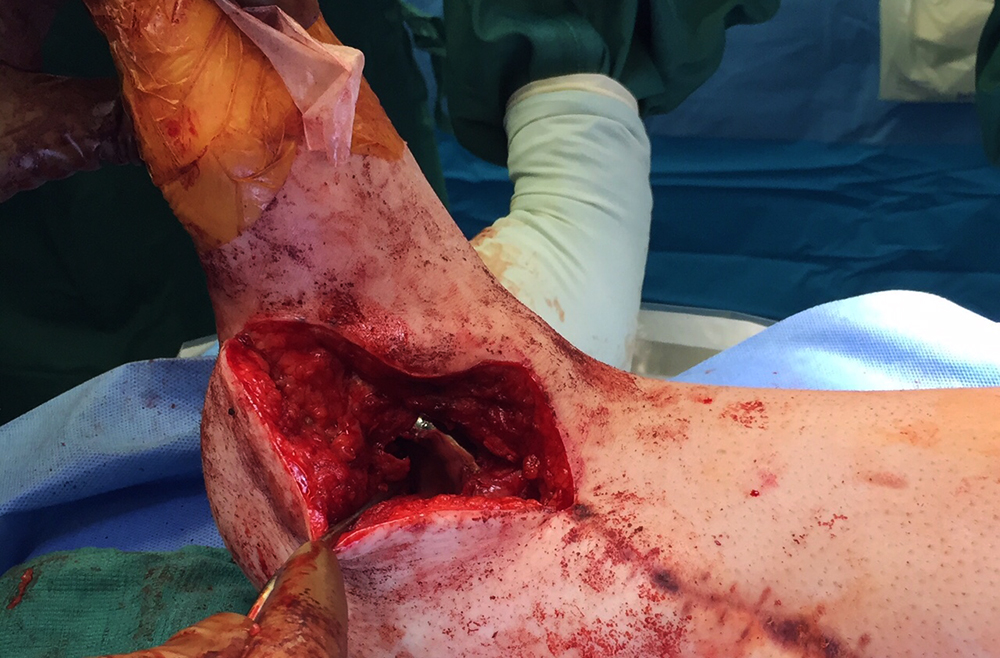 Preparation for implantation of a personalized talar prosthesis developed by scanning the talus of the opposite foot to create a 3-D print replica of the original bone.

Mr. J, a 27-year-old civil engineer, self-referred to the Orthopaedic Trauma and Fracture Service eight weeks after sustaining a fracture of his talus. He was treated by a local foot specialist at the time of his acute injury with open irrigation and debridement and the application of an external fixator. Mr. J remained in the external fixator device without further stabilization of his talus for six weeks until the wound started to break down.

At Penn Orthopaedic Trauma, an MRI was obtained revealing a non-united, infected, avascular talus. Mr. J's wound was then assessed by the orthoplastic service. After a lengthy multi-disciplinary discussion regarding his options, which took into account his age, desired activity level, and recovery time, Mr. J chose to proceed with a staged reconstruction of his ankle.

During the post-operative healing period, a three-dimensional image of Mr. J's opposite (left) talus was created, and used to build the full-metal right-sided talar prosthesis through a commercial partner. The building process was a multi-national effort, including conference calls and CAD model reviews. One month later, a second surgery was performed at the now-healed site of injury to remove the spacer and implant the talar prosthesis.

At Mr. J's one-year follow-up, an X-ray (Figure 1) found the prosthesis was stable, and there was minimal post-traumatic change in the surrounding bones. Mr. J reported no pain or substantial issues with mobility, was bearing full weight on the leg and wearing a regular shoe. He has returned to work and some recreational activity.