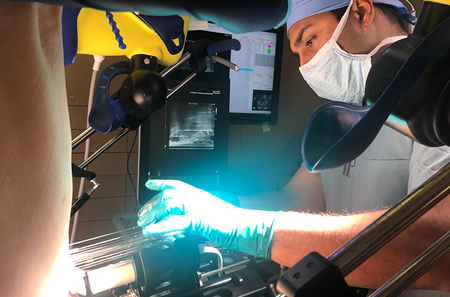 Radiation oncologists at Penn Medicine are now offering high-dose rate brachytherapy for men with clinically localized prostate cancer who are eligible to receive brachytherapy as definitive therapy or in combination with external beam radiation.

A type of radiotherapy that places the source of radiation directly into or nearby targeted tissue to kill cancer cells, brachytherapy is available in low dose rate (LDR) and high dose rate (HDR) forms. LDR brachytherapy, which involves the permanent placement of 50 to 100 low-dose (0.4–2.0 Gy/h) radioactive “pellets” into the prostate via needle applicators, will no longer be offered at Penn Medicine.

What is High-Dose Rate Brachytherapy?

High-dose rate (HDR) brachytherapy involves the precise temporary positioning of a high-dose (?12 Gy/h) radioactive pellet near the target tissue, using external grids and 3D pathologic mapping of the prostate to ensure accuracy of placement to predefined areas of the prostate.

HDR brachytherapy offers certain advantages versus both EBRT and LDR-BT. EBRT is an effective standard therapy for prostate cancer limited to the pelvis, but presents some safety issues, particularly the risk of off-target radiation exposure to organs outside the prostate. By comparison, both low-dose and high-dose brachytherapy offer optimal conformality and greater dose intensification within the prostate with superior sparing of normal tissues. Furthermore, unlike EBRT, brachytherapy is not affected by movement of the patients or tumor during therapy and has been shown to deliver a higher dose within the prostate and lower dose to adjacent organs at risk. [1] Both brachytherapy techniques, moreover, can be administered over the course of one or two visits, versus up to 44 visits over 8 weeks for EBRT. Combinations of brachytherapy and EBRT vs EBRT alone for men optimal for combination therapy demonstrate superior cancer control outcomes.

The chief advantages of HDR brachytherapy versus LDR-BT include the capacity to modulate radiation dwell time and position, the potential to escalate dosage to dominant lesions, the inherent advantage in treating prostate cancer with a higher intensity dose, and greater placement precision. An advantage in this regard is that HDR brachytherapy has the capacity to accurately target lesions with extracapsular extension or seminal vesicle invasion. Furthermore, because HDR brachytherapy is temporary, there are no radiation safety concerns after the outpatient procedure is completed.

Both brachytherapy techniques have been evaluated for efficacy in clinical trials, and the available clinical data suggests that they are equally efficacious for tumor control. Although comparative trials are lacking, there is evidence that HDR brachytherapy has some advantage vs. LDR-BT for avoidance of the rectum, bladder, and urethra.

There are a few contraindications for both brachytherapy techniques, including excessive prostate size, significant lower urinary tract symptoms, absence of a rectum, and inability to have general anesthesia or other suitable anesthesia (e.g. spinal anesthesia).

A full-service resource for men with prostate cancer, Penn Radiation Oncology offers IMRT, SBRT, and proton radiotherapy in addition to HDR prostate brachytherapy, and the advantage of SpaceOAR, an implanted hydrogel placed between the prostate and rectum to spare the latter from radiation exposure in procedures likely to place the organ at risk.

For information about the Penn HDR brachytherapy program, or to make a referral, please contact: Dr Neil Taunk and Dr Arun Goel. New patients or referrals for brachytherapy are seen at the Perelman Center for Advanced Medicine. Patients or providers may call 215-615-6767 to schedule.

At Penn, a pelvic MRI found a 22 cc prostate gland containing PI-RADS 3 and PI-RADS 4 suspicious abnormalities. There was no extracapsular extension, seminal vesicle involvement, or lymphadenopathy. In a subsequent transrectal ultrasound-guided prostate needle biopsy, the majority of standard and targeted cores were positive for adenocarcinoma. A bone scan found no evidence of bone metastases. Mr. L was diagnosed with an unfavorable intermediate-risk adenocarcinoma of the prostate (Stage IIC; Gleason score 7; Gleason Grade Group 3).

Mr. L began neoadjuvant androgen deprivation therapy, and was referred to Penn Radiation Oncology to discuss potential treatments to reduce the risk of biochemical recurrence. There, following a consultation with Dr. Neil Taunk, he opted for definitive radiotherapy using a combination of high-dose rate brachytherapy followed by external-beam radiotherapy (EBRT). The periprocedural and post procedure plans were then reviewed, as well as the potential acute and long-term side effects of radiation therapy.

Prior to his procedure , Mr. L stopped taking meloxicam and aspirin and was determined suitable risk for this procedure by his cardiologist.

Under general anesthesia, a Foley catheter was inserted under ultrasound guidance into the bladder. The perineum was then prepped and draped and an ultrasound probe with a balloon cover inserted into the rectum to visualize the prostate. The entire gland was then visualized from base to apex in the axial plane and right to left in the sagittal plane. Three gold fiducial markers were placed in the prostate through the perineum with the aid of the grid template. An initial image was then captured from above the base to below the apex. 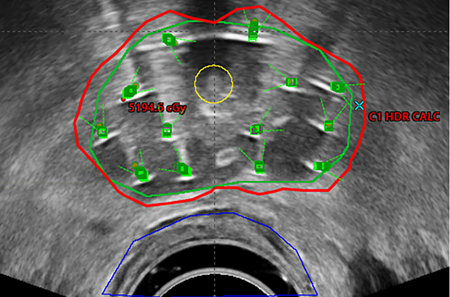 A total of 13 catheters were inserted into the prostate mid-gland (Figure 1) and under axial and sagittal guidance advanced to the prostate base. At this point, aerated jelly was mixed and injected into the bladder via the Foley catheter to improve visualization of the urethra on ultrasound, and a second set of images acquired.

After contouring and radiation treatment planning was performed, the radiation therapists and physicists connected the HDR GammaMed afterloader (a device that delivers and removes the HDR radiation source) to the perineal needles. All team members then left the room and the patient and afterloader were visualized with closed circuit television, and vital signs remotely monitored. The treatment was then delivered without incident.

At the completion of treatment, all team members re-entered the room. The needles were removed from the prostate gland and pressure held for several minutes to prevent hematoma.

At this point, the SpaceOAR hydrogel kit was prepared. A 10 mL syringe with saline was attached to the guide needle, advanced through the perineum and inserted between the anterior rectal wall and rectoprostatic fascia. This area was then hydrodissected with 8 mL of sterile saline for guidance. Proper location was confirmed in the sagittal and axial planes. The gel was then injected over 10 seconds for a total of 10 cc of SpaceOAR insertion. Placement was confirmed in both the axial and sagittal planes, and extended from the mid-gland to the seminal vesicles. The probe and bracket were then removed and thereafter the ultrasound was removed from the rectum. Finally, the Foley catheter (which was draining clear yellow throughout the procedure) was removed.