Surrounding the rim of the hip socket like a gasket, the labrum is composed of dense fibrocartilaginous tissue and serves to distribute contact pressure across the articulating surfaces of the hip and reinforce joint stability. Labrum tears, in which portions of the labrum separate from the socket, are a common injury brought on by FAI.

FAI occurs in two primary ways. Pincer impingement occurs as bony overgrowth of the rim of the acetabulum. Cam impingement occurs on the femoral head as bony overgrowth that alters the roundness of the ball and its fit in the socket. In either configuration, FAI has the potential to injure the acetabular labrum and cause hip pain and symptoms as well as lead to the long term degeneration of the hip joint.1

The Penn Hip Preservation Center offers open and minimally-invasive surgeries to repair the labrum and correct the bony deformities associated with FAI. Typically, patients who are candidates for surgery are between high school age and ~50 years old, are active in organized sports and other recreation and wish to postpone or prevent hip replacement surgery. 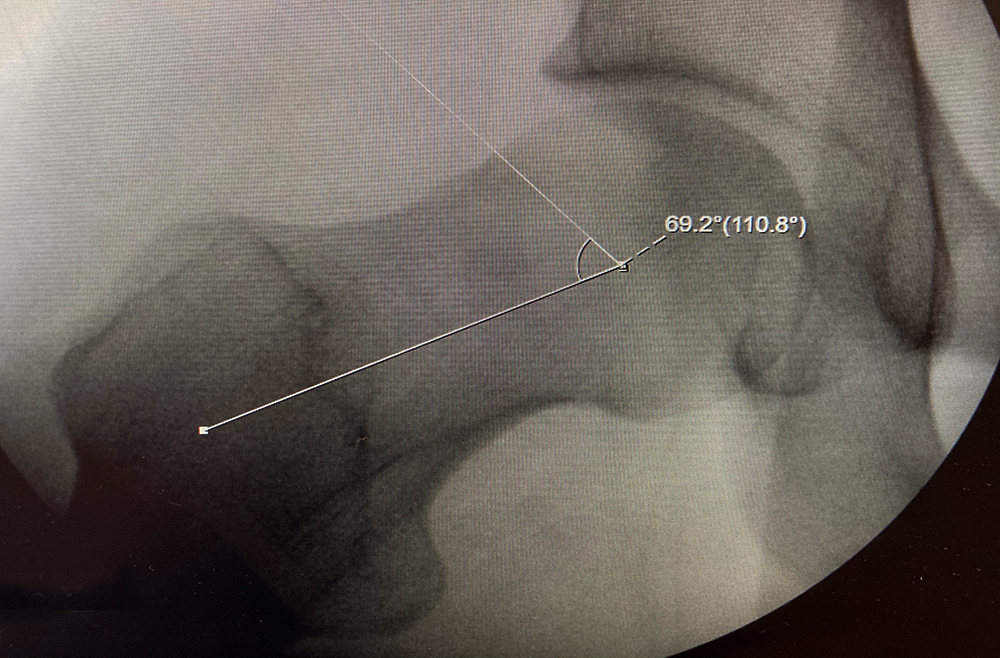 Figure 2: Correction of femoroacetabular CAM impingement in the same patient following arthroscopic surgery to reshape the femoral head; note that the lateral center edge angle is now within the normal range at 41°.

AJ, a 27-year-old male, former Division 3 basketball player was referred to the Penn Hip Preservation Center by his primary care provider with a three-year history of nagging right hip pain. A mutual fund manager, AJ continued to play in a competitive basketball league despite occasional pain until a week before his presentation at Penn, when an acute, painful catching sensation at his hip during a game signaled an ominous progression in his injury.

AJ then visited his primary care provider, who suspected arthritis (for which catching is a symptom) and ordered an x-ray. Finding nothing to clarify a diagnosis, he ordered physical therapy, which was briefly beneficial. Returning to his primary care provider several weeks later when the pain worsened, AJ was referred for a diagnostic hip injection under fluoroscopic guidance. This took away the pain for ~8 hours and confirmed that the hip joint, rather than soft tissue, was the source of pain. The next day, an MRI identified a labral tear at the right acetabulum of AJ's hip, as well as healthy cartilage.

AJ was then referred to the Penn Hip Preservation Center, where he met with Center Director Christopher Anthony, MD. When asked for a history, he described a groin pull injury in his junior year in college that had resolved about a week later, but that the original deep pain had returned in his right hip a year later and progressively worsened. At this point, he said, it was very difficult for him to sit for prolonged periods of time, which was becoming an issue at his workplace.

AJ then had a second MRI, which confirmed the labral tear and demonstrated an offset (CAM) deformity at the head and neck junction of his right hip. This was the source of the impingement that caused the tear. After a consultation, AJ decided to have both the CAM impingement and labral tear repaired and was scheduled for surgery five weeks later.

At surgery, AJ's hip joint was accessed through two one-centimeter poke incisions on the lateral aspect of his hip. Dr. Anthony then inserted an arthroscope to ensure that no other damage was present than that expected with the pre-operative imaging. Finding none, the labrum was repaired with two anchor sutures that wrapped around the labrum and pulled it back to the bone. The CAM deformity was then re-shaped by shaving off bone with a burr to make the head circular again. This allowed the hip to flex up so that the bone wouldn’t contact the labrum. The hip capsule was then sutured and closed.

About The Penn Hip Preservation Center

The Penn Hip Preservation Center is focused on helping adolescents, young adults and active adults who are looking for strategies to postpone or prevent hip replacement surgery. If left untreated, chronic hip pain may lead to arthritis and eventual hip replacement. The goal of our Center is to take a patient-centered approach to alleviate pain and improve function across the full spectrum of hip care.